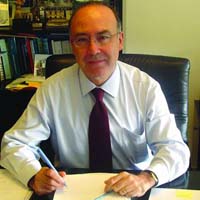 Eugenio Oñate
Dr. Eugenio Oñate is a Civil Engineer. His activity in the last 35 years has combined in a balanced manner an academic career as Professor of Structural Mechanics at the Technical University of Catalonia (UPC), a research career in the field of numerical methods and their application to engineering and the transfer of the results of his research to the industrial sector. His research achievements in the field of numerical methods and software for the analysis and design of structures, fluid dynamics and industrial manufacturing processes are internationally recognized. His scientific contributions and software derived from his research activity are of particular relevance to the solution of multidisciplinary problems in the field of civil, industrial, aerospace, marine and naval engineering, among others.

We note his contributions to the development of new numerical methods for the study of the safety of structures under the effects of water currents, with application to the study of the safety of dams, breakwaters, harbors and building structures in general, in presence of large waves, flooding or tsunamis. His work in this field was awarded in 2010 with an Advanced Grant of the European Research Council (ERC). The Grant has a budget of 2.5 million Euros to perform research in the field during five years. The Advanced Grant is one of the most EC important prizes to individual researchers in Europe.

He has published 289 articles in JCR journals as well as several books in Spanish and English. He has 4.532 citations and an h-index of 34. He is the editor of the JCR journals "Archives of Computational Methods in Engineering" (since 1994 and published by Springer), "Métodos Numéricos para Cálculo y Diseño en Ingeniería" (since 1985 and published by Elsevier) and “Computational Particle Mechanics”, starting in January 2014 (Published by Springer). He has organized 51 international conferences.

The professional activity of E. Oñate has combined teaching, research and technology transfer as well as his participation as manager in international scientific organizations. He was the founder and Director since 1987 of CIMNE, one of the most prestigious research centers in the world in the field of computational engineering. He was a founder and first president of the Spanish Society of Numerical Methods in Engineering (SEMNI) and was also president of the European Community for Computational Mechanics in Applied Sciences (ECCOMAS) and of the International Association for Computational Mechanics (IACM). He has been a driving force behind the creation of twelve technology-based companiesin Spain. These companies market worldwide the products resulting from the research at CIMNE. He has received numerous awards and honors at international level.